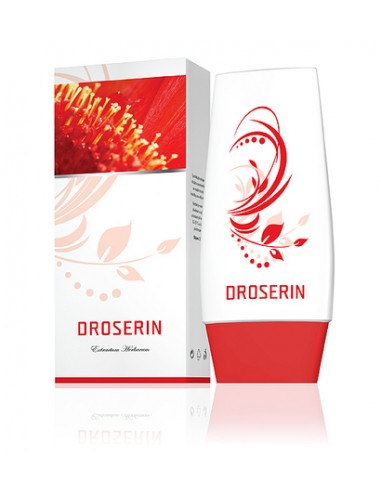 This cream is suitable for harmonization of the energy channels when suffering from influenza, tonsillitis, cold, sinusitis, metopantritis, cough, heart pain, some cases of microbial and mycotic diseases of skin, and varicose ulcers. It may be also applied in the treatment of medullary, liver and stomach infections, infections of small and large intestine, lowered immunity condition, bronchus and breathing disorders, and also in cases of otitis media. It proved its worth also in cases of pain in cervical and middle spine, shoulders, and collarbone insertions.

Droserin is a bio-information wide-spectrum regenerative cream that contains a balanced herbal complex and high volume of thermal water from the Podhajska hot spring. Its the most important components are Rosa centifolia and the bio-information of Drosera rotundifolia – both have excellent effects on the lungs and skin.

The cream primarily influences and balances the energy channels of the lungs, large and small intestine, heart, liver and stomach, thus it has positive effect in treatment of conditions caused by dysfunction of the organs located on these channels. E.g., stronger cough with asthma, pain in the socket between the collarbones, sometimes even accompanied by phlegm, is a typical symptom of disorders on the lungs channel. However, the cough may be caused also by weakness of the kidneys channel. Then the cough is weaker, often connected with heartache and short breath. A man suffering from such conditions is easily recognized by the typical display of timidity.

The lungs are closely tied to the skin. The sufficient amount of the lungs energy is proved by the quality of skin and also hair is strong and soft. The connection between lungs and epidermis bears on a dispersive function of this organ. It is just the lungs energy that transports nutrition and liquids (sweat, blood, etc.) to the epidermis. Thanks to the right functioning of the

lungs the skin is sufficiently nourished with a proper blood circulation. The skin is then elastic and appropriately moist, and as such is able to protect a body against external impact. The whole body surface breathes together with the lungs. So the secret of good looks lies mainly in the correct function of the lungs that is also related to the correct moisturizing of our skin. Moisturizers solve this problem only temporarily. Therefore, pay attention to the correct breathing that contribute to the regeneration of lungs and also improves the quality of our skin.

Droserin has a strong influence on the fourth chakra, which is a motive force of the energy circulation in a body. If the lungs are in harmony, then also our nose is able to better distinguish smells and scents and our voice becomes resonant and clear (for a good voice the correct functioning of kidneys is necessary, too). So the weakening of lungs leads to the weakening of body surface, outcome of which is spontaneous perspiration, weak respiration, and skin desiccation. The reverse conditions such as clogging of pores and blockage of perspiration may occur. The congestion of nasal sinuses may be caused by the dysfunction of lungs, too. The man suffering from hereditary weakness of lungs and their insufficient energy will be liable to the feelings of distress and sorrow for all his life. The lungs control and regulate the energy in the whole body.

One of the Droserin components (approx. 50 % of volume ) is strongly energized water from the Podhajska hot spring . It is tertiary seawater that has beneficial effect on the lungs. Owing to the unique mineral composition i ts regenerative effect is longer lasting and more profound than the effect of the Dead Sea water . Thanks to this water Droserin contains high volume of potassium, magnesium, calcium, sodium, sulphur, phosphorus, silicon, boron, lithium, zinc, manganese , and a number of other minerals that have a positive effect on the processes in our body. From the plant therapy is well known a strong influence of silicon on pulmonary tissues; lithium soothes the neural system; moreover, the briny seawater has positive effects on various skin inflammatory conditions. The thermal water minerals act also as a perfect natural peeling.

The regeneration processes after application of Droserin are speeded up by vitamin E and apple vinegar contained in the cream. They are a balm for the tired body and flaccid skin. The apple vinegar is the excellent natural complex of AHA acids.

Natural substances and bio-information contained in the cream have positive effects on some eczema in the groins preceded by the strong perspiration. The cream is also suitable in the gall bladder conditions when topical application of Droserin (on the area of lungs) and oral application of Regalen is recommended. Little known is the connection between dysfunction of lungs and gall- and kidney stones. The Czech visionary Father Ferda has emphasized that dysfunction of the lungs causes dysfunction of liver . In disharmony of this field and pain in the lungs channel Droserin may be successfully applied on these areas.

Virgin plant oils contained in Droserin complement the natural basis of the cream and nourish the skin. A pleasant soothing rose scent will harmonize your mind and facilitate removal of inner stress.

Pulmonaria officinalis: contains silicic acid in soluble and insoluble form, saponins, allantoin, and mineral substances. Applied topically it has astringent, softening, and anti-inflammatory effects. It is also applied in bronchitis.

Origanum vulgare: due to the high volume of essences, tannins, flavonoids, and bitter principles it is used in pulmonary diseases. It acts against spasms, strengthens the nerves, improves heart function and promotes peripheral blood circulation.

Plantago lanceolata: contains tannins, slime, enzymes, vitamin C, silicic acid, calcium, and potassium. Applied topically it has a positive effect on non-healing wounds and skin disorders. It has anti-mycotic effect. It is also used in asthma and cough.

Verbascum densiflorum: inhibits spasms of bronchial tubes and facilitates expectoration. It is used in bronchial asthma. It contains saponins, tannins, flavonoids, and slime.

Glycyrrhiza glabra: content of anti-inflammatory substances and plant hormones acts in similar way as corticoids. It is used against spasms and it dissolves phlegm.

Sophora japonica: due to the volume of rutin it has a positive effect on blood vessels, allergies, and skin disorders. Further it has anti-inflammatory effect.

Tussilago farfara: contains high volume of zinc and potassium, slime, flavonoids, and tannins. It is used in the treatment of asthma, cough, and upper respiratory catarrhs.

Tropaeolum majus: acts as a natural antibiotic that is effective against 46 strains of Staphylococcus bacteria and also other strains even in the lowest concentration.

Curcuma longa: contains dye, strong bitter principles, and the essence. It has strong antibacterial and antipyretic effects. Topically it is applied on the non-healing wounds, in treatment of sore throat, hepatitis, and conjunctivitis. It soothes skin itching.

Hyssopus officinalis: Due to its strong antibiotic effect it is used mainly in treatment of bronchitis, sore throat, and also asthma. It contains essences, organic acids, and tannins.

Cinchona officinalis: also contains substances with antibiotic effect. It is used in treatment of malaria, and similar infections accompanied by fever and ague.

Cetraria islandica: contains slime, bitter principles, and so-called moss acids. It has strong antiviral and antibiotic effects. It is recommended for treatment of upper respiratory catarrhs and tuberculosis.

Thymus vulgaris: have strong antibacterial and anti-mycotic effects. It contains the essence, tannins, organic acids, bitter principles, and saponins. It is used in treatment of bronchitis, and it inhibits spasms.

Galeopsis segetum: is a plant that has unique effects in cases of collagenosis, tuberculosis and inflammatory conditions. It contains silicic acid, saponins, tannins, and essences.

Aralia mandshurica: stimulates the central nervous system, improves the function of immune system, and has an overall positive effect on the body. It contains aralosides, essence, alkaloids, and saponins.

Zingiber officinale: is used for the volume of essence, phosphorus, and vitamin C. It has strong antibacterial effect. In vitro it kills Trichomonas vaginalis. It removes kinetosis, promotes peripheral blood circulation, and stimulates the lungs during infections.

Equisetum arvense: Due to the volume of silicon it has strong regenerative effect on tissues. Further it contains silicic acid, flavonoids, and saponins. It is topically applied on poorly healing or non-healing wounds and rashes.

The complex of bioactive substances from the plants, minerals and bio-information in Droserin may be used for harmonization of the energy channels in cases of pain in cervical and middle spine, shoulders, collarbone insertions, elbow , in cases of large intestine disorders, influenza, tonsillitis, cold, sinusitis, metopantritis, cough, heart pain, medullary infections , in some cases of microbial and mycotic diseases of skin, liver, stomach, small and large intestine, in cases of varicose ulcers , for activation of the fourth chakra and thymus gland in lowered immunity condition, lungs, bronchus and breathing disorders , and also in cases of otitis media .

Interesting experience: The cream may be used for preparation of a pleasant emulsion skin lotion or refreshing emulsion bath (by dissolving in water). Any cream of the info-cosmetics pentagram can be used such way.

We recommend the combination with the Energy preparation Vironal.

The cream is applied topically on problematic places in very thin layer once up to three times a day. It is easily smeared and then washed off with water. Other applications are possible in the places above single organs or in the area of their reflexive zones and energy channels. When having cold we recommend to apply the cream on the area of throat, neck, nose, chest, cheeks, and elbows (on the elbows area also in cases of heart pain).

In cases of otitis media apply the cream topically around the ears together with the Audiron preparation.

In severe health problems always consult your physician. To specify diagnosis the machines based on EAV or some other methods may be used.