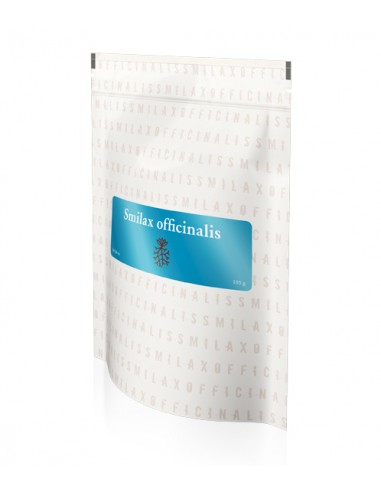 Smilax officinalis (Sarsaparilla) is native to the areas of Central America and West India. Primarily it contains steroidal saponins, glycosides, mitraphylline, rhynchophylline, hirsutine, and also calcium, copper, iron, iodine, manganese, potassium, silicon, sodium and sulfur, vitamins A, C, D and vitamin B group.
It harmonizes the energy channel of kidneys and urinary bladder. It facilitates excretion of the waste salts from the body; has a beneficial effect in psoriasis, rheumatic conditions, arthritis, and inflammations of genitourinary system.

Sarsaparrila is a perennial plant native to Central America where it has been used in the traditional medicine as a medicinal plant boosting vitality and virility, and also as an additive to beer and other drinks utilizing thus its foaming properties. In the 16th century this charming plant won the western world over as an effective cure for syphilis and a number of other STDs. Later it was proved that the medicinal properties of sarsaparilla are wide-ranging and can be used in the treatment of various health conditions from impotence up to toothache.

Part of the plant used: root

Use in the following conditions:

Preparation and dosage: 1 teaspoon per 1 liter of boiling water. Boil for 3 minutes and strain. Drink small cups in the course of the day but not after 5pm. Drink for a period of one month.

Contraindications: Not suitable for children under age 3, pregnant and nursing women.