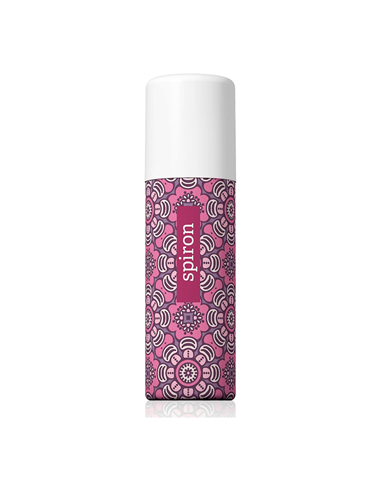 This product contains a balanced composition of the purest essential oils and bio-information. Via inhalation the aromatic substances get into our blood circulation very fast, and therefore they are able to remarkably stabilize some bodily functions. Primarily it influences the channels of lungs, heart, large intestine, stomach, waist, and to some extent also other energy channels. It may be used for headaches, depressions, neurasthenia, neural fatigue, infectious lung disease, and influenza. While traveling, Spiron may be used also as a disinfectant.

Spiron contains a balanced composition of the purest essential oils and bio-information and is manufactured using the latest knowledge from the fields of aromatherapy, psychotronics, plant therapy, and bio-resonance. Primarily it influences the channels of lungs, heart, gallbladder, and to some extent also other energetic channels.

According to the leading sociologists and neurologists the characteristics of our age are anxieties and depressions. The evidence of this fact could be found in the data showing growing consumption of tranquilizers and stimulants. It is well known that after longer use these remedies have a negative effect on the organism. In contrast, some oils and their aromatic compositions positively influence mainly CNS, through which they can have further positive effect on various physiological functions. Today nobody is surprised by the fact that our mental state influences our physical condition and vice versa.

Via inhalation the aromatic substances get into our blood circulation very fast, and therefore they are able to remarkably stabilize some bodily functions. Sniffing of toxic substances can cause sepsis, damage your liver and other organs. On the other hand, inhaling the substances that are healing can improve our health. The aromatic substances can elevate or lower the blood pressure and kill the headaches. At the same time they can tonify or tranquilize our organism. Pleasant scents induce a state of well-being, what could help in various successful business dealings and friendly visits. In the peaceful environment one can solve as three times more dealings as in the hostile environment. A feeling of well-being comes very fast after the inhalation of aromatic essences with tranquilizing effect and may be proved, e.g., by the appliance designed for measuring cerebral waves, so-called encephalograph. With other appliances we can measure depth of breathing, changes of blood pressure, pulse, and calming down the heartbeat.

Some essential oils are able to perfectly disinfect the air. After spraying, e.g., even 2 % solution of eucalyptus oil can kill up to 70% of the local staphylococci in the air. It has very good effect against various viral diseases such as measles, scarlet fever, herpes, and influenza. The great effect on the influenza virus has also lemongrass oil. Such oils and their compositions may be used as antiseptics of the air during the treatment of various viral diseases when we need to prevent the droplet infection of other people. Spiron contains a number of the pure essences that have antiseptic and healing effects.

Myrtle oil: facilitates healing and has antiseptic, anti-depressive and tranquilizing effects. It facilitates expectoration. It is used in the treatment of sinusitis, cold, bronchitis, smoker's cough, and cervical infection.

Sandalwood oil: has anti-depressive, tranquilizing, analgesic, and aphrodisiac effect. It removes neural tension and inhibits spasms. It is used in the treatment of cold, sore throat, bronchitis, and bronchial catarrh. It acts against streptococci, staphylococci, and mycobacterium tuberculosis. It has very positive effect on the mucous membranes of the lungs.

Lavender oil: stimulates the heart, tonifies, and soothes. It has antiseptic, anti-toxic, and healing effect. It is used for migraines, depressions, insomnia, hysteria, neural fatigue, influenza, bronchitis, laryngitis, and high blood pressure. It speeds up the regeneration of tissues.

Mint oil: overall stimulates and rejuvenates. It facilitates the brain functions, stimulates the heart, facilitates breathing, and alleviates headaches. This oil is antiseptic, anti-spastic, analgesic, and anti-inflammatory. It is used for influenza, sinusitis, high fever, asthma, tuberculosis, lipothymia, and fatigue.

Eucalypt oil: is used for cold, influenza, cough, bronchitis, fever, and migraine. It is one of the best antiseptic. The laboratory tests revealed that even 2% of eucalypt essence in the sprayed composition could kill up to 70% of local staphylococci in the air and various types of viruses. It facilitates concentration and the heart function.

Balm oil: is suitable for all head and neural disorders, relieves melancholy, cardiac neurosis, lowers blood pressure, heals, and has anti-spastic effect on bronchi. It is used to strengthen the nerves and in the treatment of high fever, insomnia, asthma, and depression.

Camphor oil: has anti-spastic, analgesic, anti-depressive and tranquilizing effect. It lowers fever and high blood pressure. It heals and stimulates the heart function, breathing, and promotes blood circulation. It is used for colds, pneumonia, and other infectious diseases. It is able to harmonize the organism.

Incense oil: has very strong healing effect on mucous membranes and tranquilizing effect. It purifies the air and has good effect in the treatment of cough, catarrhs, laryngitis, breathlessness, and cold. In older times the incense was considered as highly luxurious and valued commodity.

Arbor vitae oil: has a positive effect on people suffering from asthma and on liver disorders. It appeases neuritis and has anticancer, tranquilizing, anti-mycotic, and antiviral effect.

Spruce oil: stimulates cerebral cortex function and has tranquilizing effect. It is used in the treatment of respiratory disorders, e.g., cough, pneumonia, influenza, and cold.

The complex of pure essential oils may be used to create a pleasant environment before the dealings of any kind, to bring the overall comfort and sound sleep. It may be used for headaches, depressions, neurasthenia, neural fatigue and other neural disorders , as an air disinfectant in cases of asthma, cough, bronchitis, smoker's cough, infectious lung disease, and influenza , for cold ; to relieve the airways , calm down the heart , increase immunity , and freshen the air in the smoking premises. The aim of this is to create very pleasant environment and a feeling of well-being at home and at work.

Shake well before use and apply by a short spray in the air or apply it on a clean handkerchief and inhale.

Before spraying make sure you are not aiming at someone's eyes!

Do not expose the container to high temperatures!

Do not pierce or burn, even after use!